The U.S. solar industry has enjoyed impressive growth of late, with strong forecasts for 2016, but it’s been an at-times bumpy ride as the industry has faced unfavorable rulings and stock-market troubles.

Over the past few months, the U.S. solar industry has soared to thrilling wins (Paris agreement, ITC extension, record installations) and stomached sinking setbacks (Nevada net metering, Supreme Court stay of the Clean Power Plan). The industry cheered last week when SEIA and GTM predicted 16 GWdc PV installations in 2016, yet the stock prices of solar giants like SunEdison and SolarCity are stuck near 12-month lows.

Besides buckling their seatbelts, what can industry stakeholders do in this still-volatile market?

One option is to cut costs and gain market share in solar’s main segments: behind-the-meter (including rooftop residential as well as commercial and industrial (C&I)) and utility-scale. But the smartest developers are cutting costs and looking for an early-mover advantage on the next gigawatt-scale solar segment opportunity.

Community-scale solar is that opportunity, and RMI shows how and why community-scale is a large and emerging opportunity in its insight brief Community-Scale Solar: Why Developers and Buyers Should Focus on This High-Potential Market Segment.

Though shared solar systems vary in size, the vast majority of shared solar capacity is community-scale. In Colorado and New York, for example, shared solar installations are capped at 2 MW. In Minnesota, systems are now capped at 1 MW. In most instances, shared solar developers seek economies of scale by developing projects at or near these capacity limits.

Nearly half of U.S. households and businesses cannot access rooftop solar. According to the National Renewable Energy Laboratory (NREL), 49% of U.S. households are unable to host rooftop solar, either because they rent their home, live in dwellings such as a multi-unit apartment buildings or high-rise condos, or have a roof unsuitable for solar. NREL also reports that 48% of commercial buildings have roofs too small to host on-site solar PV of any meaningful size (i.e., covering at least 20% of demand). Community-scale solar provides access for these customers currently unserved by rooftop solar.

Community-scale solar is also inclusive to low- and moderate-income (LMI) households. In states such as Colorado and New York, community solar laws include a carve-out or preference for LMI subscribers. Rural electric cooperatives are using community solar to serve LMI members. In Rochester, NY, the city is willing to provide sites and other support for community solar, because LMI households have access to the power produced. Even the White House and the Department of Energy are betting that community solar will address the environmental justice barrier of rooftop solar.

Altogether, the community-scale solar market potential for U.S. households and businesses that cannot access rooftop solar is more than 750 GW (see figure). Capturing just one percent per year of this market translates into a 7.5 GW market worth over $10 billion annually. 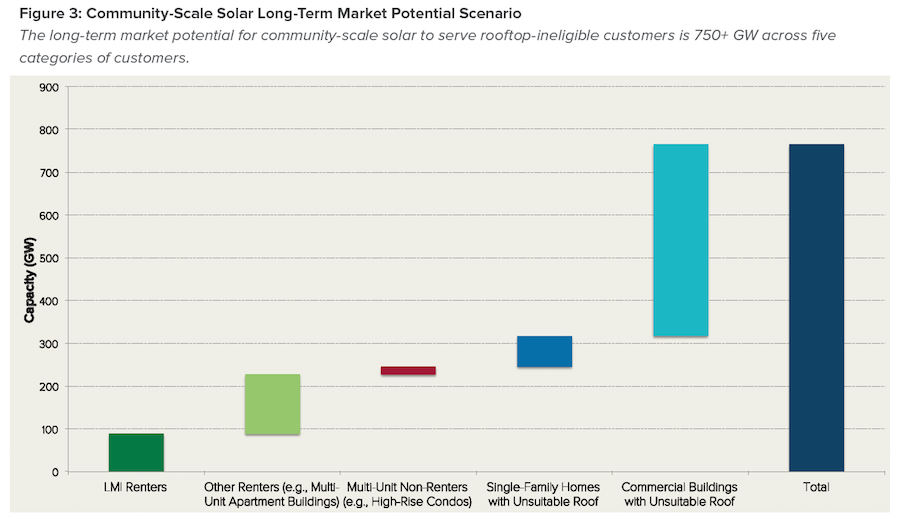 2. AFFORDABILITY: LIKE UTILITY-SCALE, COMMUNITY-SCALE SOLAR CAN COMPETE WITH WHOLESALE RATES 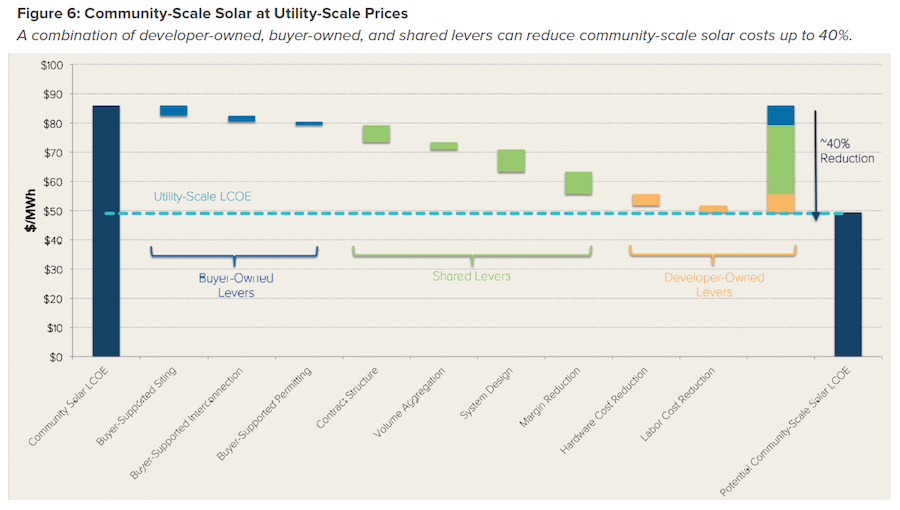 Buyers can reduce costs by supporting or leading aspects of the development process. Community-scale buyers are often co-ops, munis, or community-based organizations. These community-based buyers are in a unique position to reduce total cost by supporting siting, interconnection, and permitting and zoning. Sophisticated (or well-supported) buyers can effectively act like pre-notice-to-proceed (pre-NTP) developers.

Sellers are already findings ways to decrease costs through standardized power blocks, and they are exploring further cost-reduction opportunities through integrative whole-systems design. Power blocks along with business-as-usual cost reductions will allow unsubsidized community-scale solar to compete with wholesale rates.

Community-scale solar is at a sweet spot between utility-scale and behind-the-meter solar. It is neither too big nor too small; it is just the right size to capture community and distributed energy benefits on one hand and utility-scale solar’s economies of scale on the other.

4. AVAILABILITY: COMMUNITY-SCALE SOLAR CAN BE SITED IN THE COMMUNITY TO DRIVE HIGHER ADOPTION

Community-scale solar can also be flexibly sited near loads, opening up sites for development, and avoiding siting and transmission constraints that may impede long-term utility-scale growth. Community-scale solar can be flexibly sited on under-utilized land near loads. For example, EPA’s RE-Powering America’s Land program helps communities and utilities site projects on contaminated land.

Large parking lots can now cost-competitively host community solar, too. According to industry contacts, costs for canopy systems have decreased more than 40 percent since 2014, and parking lot canopies now cost only an additional $0.35/W compared to similarly-sized ground-mount systems.

Though community-scale solar is still a small portion of today’s market, momentum is building for sustained rapid growth

Rocky Mountain Institute is helping to increase that momentum through its Shine initiative. RMI is working with public utilities (i.e., coops and munis), community-based organizations, and developers to unlock this market. RMI is helping coops, munis, and community-based organizations by supporting procurement and business model development. RMI is helping developers and EPCs understand the community-scale opportunity and adapt their designs and business models to best access the market.