Many times, when we see photos of solar systems or hear stories of solar installations they are on large homes, commercial buildings or even positioned atop acres of fields, but such images fail to offer a holistic view of the industry.

Solar adoption in  the  United  States  got its start back in the  1970s  during the Carter administration. Zealous federal government funding programs incentivized its US development with good intent, but much of the money was misallocated without the anticipated growth. When leadership changed, a new position was taken: solar was dead and labeled unsuccessful. In fact, the solar modules that had been installed on the White House were removed.

A resurgence occurred in the late 1990s and early 2000s, but solar products, installation and permitting costs were high which limited the ability of most Americans to “Go Solar.” Accordingly, early adopters  were generally  those that  were more affluent  or  retired with discretionary income to support movement toward clean energy. Pricing has dropped from as much as $10/watt back at that time to around $3.20/watt, or less, depending on system size.

Solar is more affordable now than ever, but the “word” is not out yet to the masses. Solar product pricing, available incentives and local finance opportunities make going solar a solid financial investment for all–not just those with discretionary income. Owners of installed residential systems are enjoying paybacks of five to seven years for systems that are warranted for 25 years; that’s 18  to 20 years of  free electricity. Several years ago, two Springfield residents named Phillip Blood and Joel Johnson decided solar was the right choice for them. Their homes are not large, their systems are not big, but these unsung heroes of solar are an integral part of the industry.

Phillip Blood resides in a quiet neighborhood off of Stevenson Drive. He became interested in solar energy when his brother told him about CWLP offering a Solar Rewards Rebate. He reached out to Bob Croteau in the CWLP Energy Services Office to obtain a list of vendors he could contact. After connecting with a solar developer, he met to review his proposed solar plan and decided he wanted to move forward.“I reached out to people who might be able to support the funding locally and got nothing,” said Blood. “So I pursued it through my mortgage company in Texas.” They were able to assist him with a home equity line of credit that allowed him to start his installation in November 2014. Today, we have three local lenders who are willing to finance solar in Springfield: Town & Country Bank, Heartland Credit Union and CEFCU.

The  pictured  install  is  comprised  of (14) 280 watt American-made SolarWorld modules for a total system size of 3.92kW. Blood says, “[It is] awesome! I check very often to see where I am at compared to my meter. I’m still breaking very close to even.” Blood’s plans for the future include adding a few more modules to his system so he can turn down his air conditioning in summer beyond the 78 degrees he keeps it set at and have his system continue to provide him a net/net situation. “If you own your home and don’t plan on moving in the next five years, go solar,” says Blood. “Once you get your system paid off, then you will have the advantage of selling your house quicker on the market nowadays because that is going to be one heck of an advantage having solar panels pre- installed.” 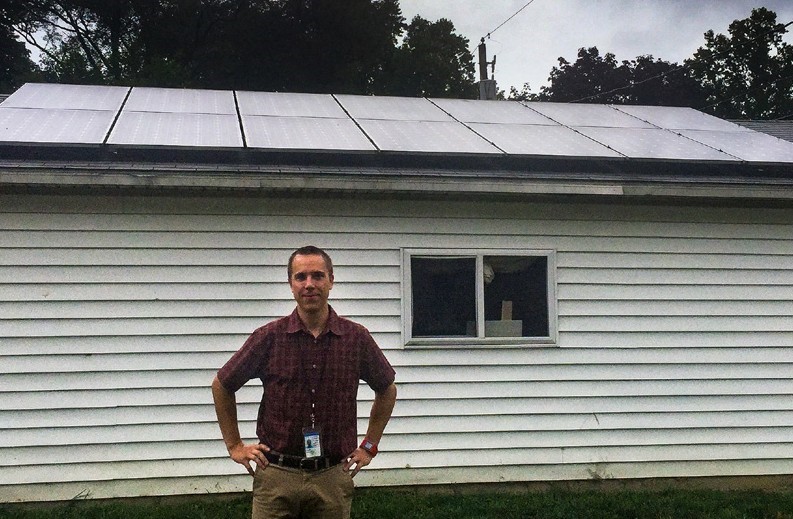 On the other side of town, just off of North Grand, resides Joel Johnson. Joel is an avid environmentalist working for the EPA as a paralegal. In May 2015, Joel decided to install solar panels on his new metal roof. “I’ve been into environmentalism for a long time and I just decided to make it more personal…wear it on my roof,” Johnson said. “I don’t expend a lot of electricity so I didn’t think I’d have a huge savings, it was a lot about symbolism. I like the technology, the energy efficiency…the cleanness of the technology.”

Johnson had been thinking about going solar for about a year before doing so. He had attended a talk at Lincoln Library on solar and then spoke with some of his fellow Springfield Bicycle Club friends that had already made the choice to install solar at their homes/businesses. He  realized  that “real people were actually doing this.” Joel did not require financing for his solar system comprised of (8) SolarWorld 270 watt black on black modules. 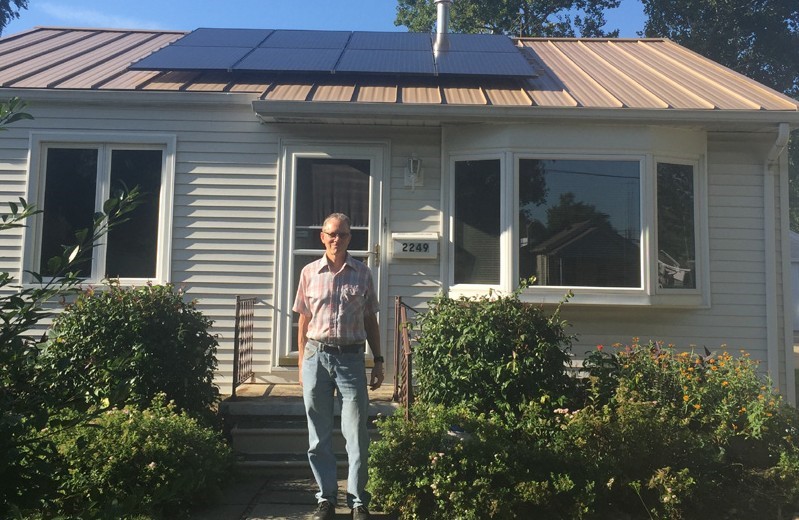 “I had enough funds to cover the solar system but took out loans to do other things with the house,” Johnson said. He replaced his roof and upgraded his electrical service prior to his install.

“My solar system is covering about 80% of my electric bill–a lot of [what’s left] is the meter charge so I can’t get rid of that,” Johnson said. In addition to his solar system working toward his desired environmental efforts, he is a biking enthusiast who recently returned from a Canadian biking trip. He built his own solar greenhouse in the backyard in which he cultivates plants for the pollinator garden located in his backyard. This is a man who not only talks the talk, but walks the walk.

“Take advantage of any incentives that are out there,” Johnson said. “It’s not going to be an immediate payback, but it’s a good medium for long term investment. I think it holds its value well and the components keep their efficiency over the years. It’s always going to be generating a product for your benefit.”

The 2017 Solar Tour is coming up on Saturday, October 7th from 10 AM – 3 PM. Both Phil and Joel’s systems are featured as part of this self-directed tour as well as many other residential systems in Springfield and throughout Sangamon/Menard County. Participants can drive to the sites themselves or the Springfield Bicycle Club will be leading morning and afternoon bicycle loops featuring solar sites near Southwind Park (morning) and sites between Sherman and Cantrall (afternoon). The afternoon loop will end at Rolling Meadows Brewery who will be hosting an Abraham Lincoln event that same day with fun-filled festivities. A van tour will also be available. For more details, visit illinoissolar.org and/or Springfield Bicycle Club or WindSolarUSA’s Facebook pages.