Michelle Knox with Chef Michael Higgins atop the roof of the building housing Maldaners. PHOTO / COURTESY OF WINDSOLARUSA 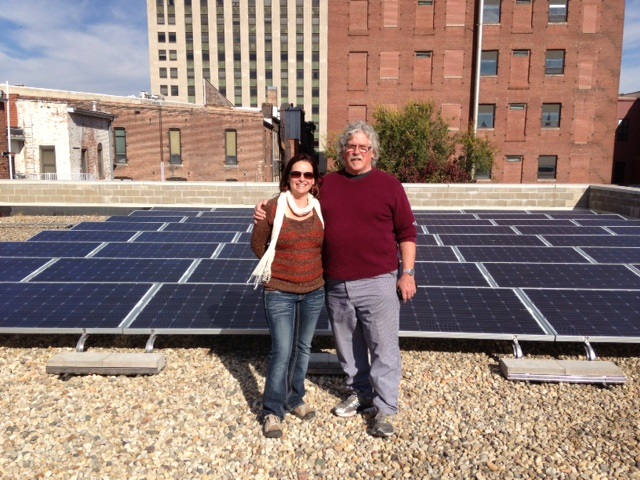 Michelle Knox didn’t set out to be an expert on solar energy. In fact, she worked in insurance, then for private schools, both as an educator and doing funding development. But her interest in renewable energy was piqued when someone asked whether a solar system could not only pay for itself but pay the owner to keep it.

Knox realized the answer was yes after doing her own research and discovering that a solar electric system could eventually pay for itself. The idea clicked, and she decided to become part of the solar power industry, founding WindSolarUSA in 2011.

Knox took courses from one of only two – at the time – renewable energy training centers in the U.S., driving to Custer, Wisconsin, for classes. She became a certified site assessor for both solar photovoltaics and solar thermal systems.

Knox uses her training as an educator to serve her customers and increase awareness of renewable energy. Because of her efforts and those of her company, Sustainable Springfield recognized Knox as Best Facilitator in Renewable Energy Installation in 2016.

WindSolarUSA also serves as a distributor for solar systems manufactured in Oregon and Florida. Knox takes a personal interest in the manufacturing process, vetting each product before entering into a contract.

“We are marketing American-made modules,” Knox said. “Not only are the modules made here, 80 to 85 percent of the components are sourced from other American manufacturers.”

She also uses local installers – Jon Locke Home Improvement in Kincaid for construction, and Senergy Electric in Williamsville for the electrical work.

WindSolarUSA systems have been installed at homes, commercial sites, schools and agricultural facilities. According to Knox, the payback period to recover the cost of a solar investment depends on the size of the installation. Smaller residential systems may take three to five years, while larger commercial installs could see a payback as early as three years.

“It allows customers to ‘bank’ kilowatt hours at the same rate that they pay for retail electricity,” Knox said.

While customers aren’t paid for the banked electricity, it is taken into account annually when assessing a business or resident’s electrical usage.

Knox says due to the favorable payback window and funding opportunities, “2017 is looking, to date, to be the best time to go solar.” ◆