Germany, the world’s fourth-largest economy, has led the world in terms of its commitment to wean itself from fossil fuels and reduce its greenhouse gas emissions. The program known as the Energiewende, or “energy transition,” was made into law in 2011. The key laws behind the Energiewende were put in place a decade earlier.

This commitment to renewables has not been merely rhetorical. Germany has installed more solar power than any other country, despite having a rather modest solar resource, and the country was until recently also the world leader in installed wind. Figure 1 shows Germany’s installed renewable electricity through 2013. 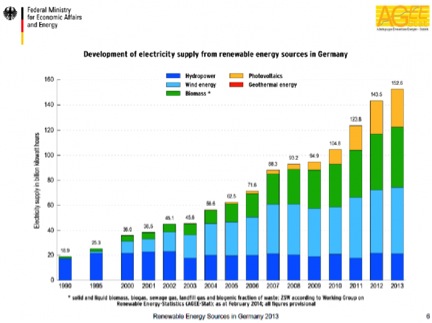 Renewable energy is now producing about 30 percent of all of Germany’s electricity needs. On some days, solar power provides half of the total grid demand, which is particularly remarkable considering that Germany only started installing solar about a decade ago. Total installed solar capacity now exceeds 38 gigawatts. Installed wind power is more than 35 gigawatts, and biomass power still produces almost twice as much power than solar in Germany, even though we hear far less about this third major renewable, which is also baseload power.

Germany installed a remarkable 22 gigawatts of solar from 2010 to 2012 (about 7 gigawatts each year), before slowing to about half that annual rate in 2013 and slowing further in 2014 as previous reforms went into place. Becoming a victim of its own success, in 2014 Germany’s legislature, the Reichstag, with the support of Chancellor Angela Merkel, enacted additional reforms of the longstanding Energiewende, designed to both slow down the torrid rate of growth and change the pricing system for new contracts.

Numerous reports in the U.S. and in other English-language media have announced the death of Germany’s commitment to renewable energy and greenhouse gas emissions reductions. Fox News commentators proclaim this shift with a glint in their eyes, seemingly happy that Germany’s radical green policies have been shown to be wrong and that the country is now being forced to backtrack.

But is any of this true? It is true that reforms have been enacted in 2014, but they’re evolutionary rather than revolutionary, and it is not at all true that Germany is backtracking on its long-term commitments. Let’s examine the evidence. First, a little history.

The origins of the Energiewende

The primary law behind Germany’s energy transition (abbreviated as the EEG) was first put in place in 2000. The EEG is a feed-in tariff, modeled on a similar U.S. law passed in 1978 (PURPA). A feed-in tariff allows producers to sell power to the utility under a long-term contract at a set price. It has been key to Germany’s success because it provided the necessary certainty for major investments to be made.

The EEG has been amended many times, most substantially in 2012 and 2014. The Heinrich Böll Foundation Energiewende website includes this brief summary of its history:

The German Energiewende did not just come about in 2011. It is rooted in the anti-nuclear movement of the 1970s and brings together both conservatives and conservationists — from environmentalists to the church. The shock of the oil crisis and the meltdown in Chernobyl lead to the search for alternatives — and the invention of feed-in tariffs.

The EEG put in place a system of feed-in tariffs for various technologies, with prices set administratively at a level deemed necessary to spur development. 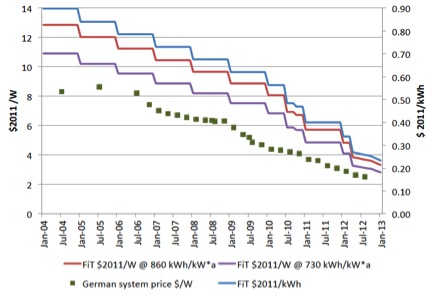 The EEG was substantially changed this July, with strong support for the changes in the German parliament. (Bentham Paulos wrote an excellent summary of these changes that’s available here.)

The key changes, which took effect August 1, are as follows:

The tentative steps toward an auction system and away from feed-in tariffs, for larger systems (more than 500 kilowatts), is perhaps the biggest change, but as Paulos points out, it’s actually not a big change from the system in place today, under which wind power projects already have to sell their power on the open market and then receive a “market bonus” to ensure that the market rate they receive is equivalent to the posted FIT price.

The difference with the planned 2017 pilot for large ground-mounted solar is that it will use the auction/tendering process to determine the appropriate FIT equivalent price, rather than setting the price administratively. Accordingly, the big change here seems to be a shift to a market-based price-setting process instead of an administratively-set price.

Before then, new solar systems will receive the FIT price but under a different mechanism than before, also relying on the market premium concept. So, in effect, the FIT is still in place, but in concept, it’s been revised in anticipation of probably bigger changes down the road in 2016, when “EEG 3.0” is planned.

A key feature of FITs, the constant price during the twenty-year contract, is maintained under the new system. So the market certainty that this constant price provides will still be operative.

Restrictions on the size of the market went into place previously for 2014, with the current annual “corridor” for solar planned at 2.5 gigawatts to 3.5 gigawatts. Again, this slowdown in annual installations is a product of the amazing success of the FIT, not a sign of failure. Germany’s farmers and companies have simply been adding new renewables, particularly solar, faster than ever expected, and fast enough that Germany’s grid operators and others have convinced the policymakers to slow down the transition a bit. This is the result of both an overly rapid growth in renewables and fears that the transition may be costing too much.

Perhaps the most telling fact with respect to the costs and the politics of the Energiewende is that almost everyone in Germany still supports the program. A February poll this year found that fully 89 percent of Germans support the Energiewende. This is a strong rebuttal to some rather breathless and sensationalistic reporting in the U.S. about the alleged failures of the Energiewende. For example, this New York Times article talked about a new “energy poverty” taking hold in Germany due to the Energiewende. However, the facts don’t support this article’s slant.

What has been the effect of Germany’s Energiewende around the world?

Correlation is not causation, but very strong correlations are often good indications of causation. We can look at the coincident timing of Germany’s FIT, plummeting prices of solar that track the declining FIT price, and the rise of, in particular, China’s solar production capacity, and draw a pretty clear picture of why solar prices came down so far so fast. To sum it up in one sentence, Germany’s robust and long-term FIT policies created huge demand for solar and prompted countries around the world, particularly China, to ramp up production to meet demand. The end result was a module price decline of nearly 80 percent or more in just a few years’ time.

A final word is warranted on the geopolitics and energy politics prompted by Russia’s new assertiveness in the region. Specifically, Russia’s interactions with Ukraine and Crimea and its demonstrated willingness to cut the natural gas spigot to major customers have rightly worried Germany. If Germany is to transition to renewables and also enhance its energy independence, it may need to eventually wean itself not only from coal and nuclear but also from Russian natural gas. About one-third of Germany’s natural gas comes from Russia, but Germany imports fully 90 percent of its total natural-gas needs (including for electricity and for heat, the lion’s share of natural gas consumption). These figures highlight the difficulty that Germany will have in weaning itself from fossil fuels by 2050. My feeling is, however, that the new issues with Russia will, if anything, accelerate Germany’s push on the Energiewende. There is already some evidence for this, and I expect to see more on this in the coming years.

Summing up, EEG 2.0 is a substantial reform of the EEG law, but it does not diminish Germany’s longstanding commitment to the energy transition. There is a clear shift in the 2014 reforms away from the FIT model for all renewables and toward a more market-based model for larger renewables. This is, in my view, regrettable, because Germany’s policies to date have succeeded in bringing new renewables below the cost of grid power, and in many cases below the cost of wholesale power, so new FIT contracts can increasingly save ratepayers money.

The certainty of the FIT process, both in terms of a long-term fixed price contract and knowing the price ahead of time, have been major factors in spurring Germany’s remarkable energy transformation. Germany’s far-sighted policies have been successful in bringing costs down dramatically, to the point where ratepayers can actually save money on new contracts — so why pull back on this policy now that is has achieved this major milestone?

While the new reforms will water down the major features of the former FIT policy, Germany is still on its way to achieving its energy transition goals long before the deadlines that are currently in place.