CAN I AFFORD SOLAR FOR MY HOME OR BUSINESS?

THE ANSWER IS YES!

Many people are still under the impression that the payback on solar is 15-20 years…NOT TRUE! In Illinois, we have new legislation called the Future Energy Jobs Act (FEJA) that incentifies clean energy development in the state in an effort to meet the legislatively mandated Renewable Portfolio Standard (RPS) that called for 25% of Illinois’ electricity portfolio to come from renewable sources by 2025. The incentives offered in FEJA, primarily renewable energy credits (RECs), coupled with the 30% federal tax credit and accelerated depreciation for business owners, are affording new solar system owners paybacks ranging from 2-5 years in most cases depending on system size, mounting type and utility pricing/ payback options.

As mentioned above, renewable energy credits in Illinois will help to meet the goals of the RPS while affording the opportunity for clean energy system owners to achieve a quicker payback, but what exactly are RECs? RECs are a production based incentive. System owners earn 1 REC for every 1,000kWh of production their system generates. Under FEJA, clean system owners will be offered 15-year contracts for their clean energy production and will enjoy the incentive being paid in one lump sum, after the system is energized and the application has been approved, for systems under 10kW (primarily residential and small commercial). Systems over 10kW will be offered a five-year payment schedule for their 15-year contract. REC pricing is highest for the smaller systems and gradually declines as system sizes get larger and move into different categories (see the DRAFT payment schedule offered by the Illinois Power Agency via their 12/4/2017 release).

In addition, the new legislation offers “Adjustable Blocks”. The first block offers the highest pricing and when the amount of new clean energy that is to be procured from that block is met, then that block automatically will close and the new block, with its slightly lower pricing, will open. Accordingly, system owners will want to get into the earlier blocks to gain the highest pricing for their clean energy production.

Let’s put these incentives into  practice  and take a look at a “real” proposal to better understand what  you  can  expect  to see if you decide to take a look at solar for yourself. Springfield Scene Magazine owner, Bill Stokes, agreed to be the “guinea pig” for this article, so we’ll be using his office as an example. Thanks, Bill!

First, we start by taking a look at a minimum of 12 months of power bills  to determine what size system would be needed to offset 100% of consumption. An accurate average cost per kWh (what your utility charges you for power) can also be derived from the bills that is then used in a cost model to show your utility offset costs. Bill’s analysis is included below as an example of Step 1.

Step 2 is the preliminary design phase. We now know what size system is needed for 100% offset, but what can we fit on the roof? What is the customer’s budget? How can we best use incentives/system sizing to meet the customer’s goals for offset while staying under budget? In Bill’s case, we could fit the full amount that he needs for 100% offset, but decided to stay under 10kW so we could model for him that lump sum payment for RECs versus having to wait to gain the incentive over five years. Bill’s flat roof design lands him at 9.8kW and is estimated to offset 56% of his consumption due to only being able to rack flat roof systems at 10 degrees due to wind and snow load permitting requirements/engineering. See his design below that actually projects the module we would use (SolarWorld US-made 350 watt monocrystalline module) onto the roof with the ballasted racking option (Unirac, which is also US-made) we have chosen.

After the prospective system has been sized and designed, we are ready to move to cost modeling. The abbreviated version of Bill’s cost model is included here which illustrates, in simple terms, the payback of his system in both written and graphic form.

The next section shows us the years to cost recovery. In Bill’s case it is 3.1 years, or 3.9 years (modified) if we factor in that his inverter, the part of the system that converts the direct current power the modules produce on the roof to the alternate current power that we need for our homes/businesses, will fail in year 12 when the warranty expires on it. The modules carry a 25-year power production warranty and the racking offers a lifetime warranty. Bill can expect his system to pay for itself and put an additional $28,900 in his pocket from utility savings over the 25-year warranted lifetime of his modules. How many tangible investments in products do you know of that will pay for themselves and then pay you to keep them with and estimated 28.6% return on investment? “Key Assumptions” are listed a the bottom of the page and pictorial graphs illustrating cumulative cash flow, consumption versus production and investment potential are included on page 2 of the model.

In summary, with solar pricing more affordable than ever and the great federal and state incentives that we now have available, there has never been a better time to go solar. We have also established relationships with local banks to help finance solar projects in the short term for our customers who may not have the cash on hand to invest. The old barriers that used to keep home and business owners from considering solar are gone. Now is the time to “Go Solar Illinois”!

LEGISLATIVE UPDATE: Since this article was written, an Illinois Commerce Commission Administrative Law Judge found in favor of a ComEd proposed -Exception- contending that municipal and cooperative utilities should be EXCLUDED from funding opportunities afforded in the Future Energy Jobs Act. Michelle Knox and 11 other business owners in Central and Southern IL have filed an ensuing -Brief on Exception- asking that this be overruled by the ICC commissioners and that municipal and cooperative utilities be INCLUDED in the funding opportunities. The final decision will be rendered April 3, 2018. The renewable energy credit funding aspect of the included cost model in the article below will not be applicable if Springfield, our capital city and municipal utility, is not allowed to participate. 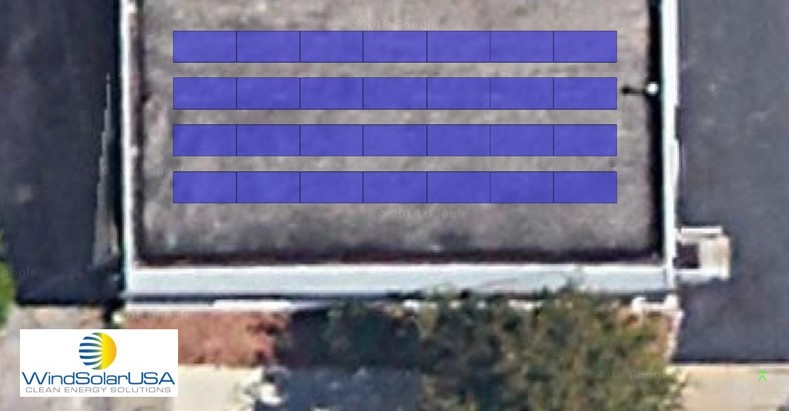 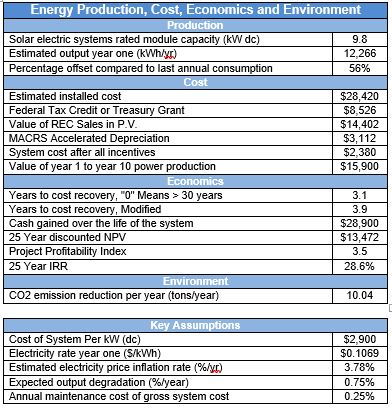 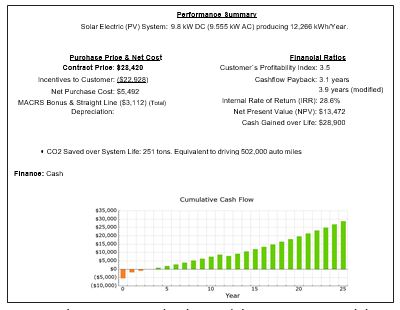 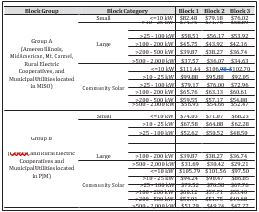