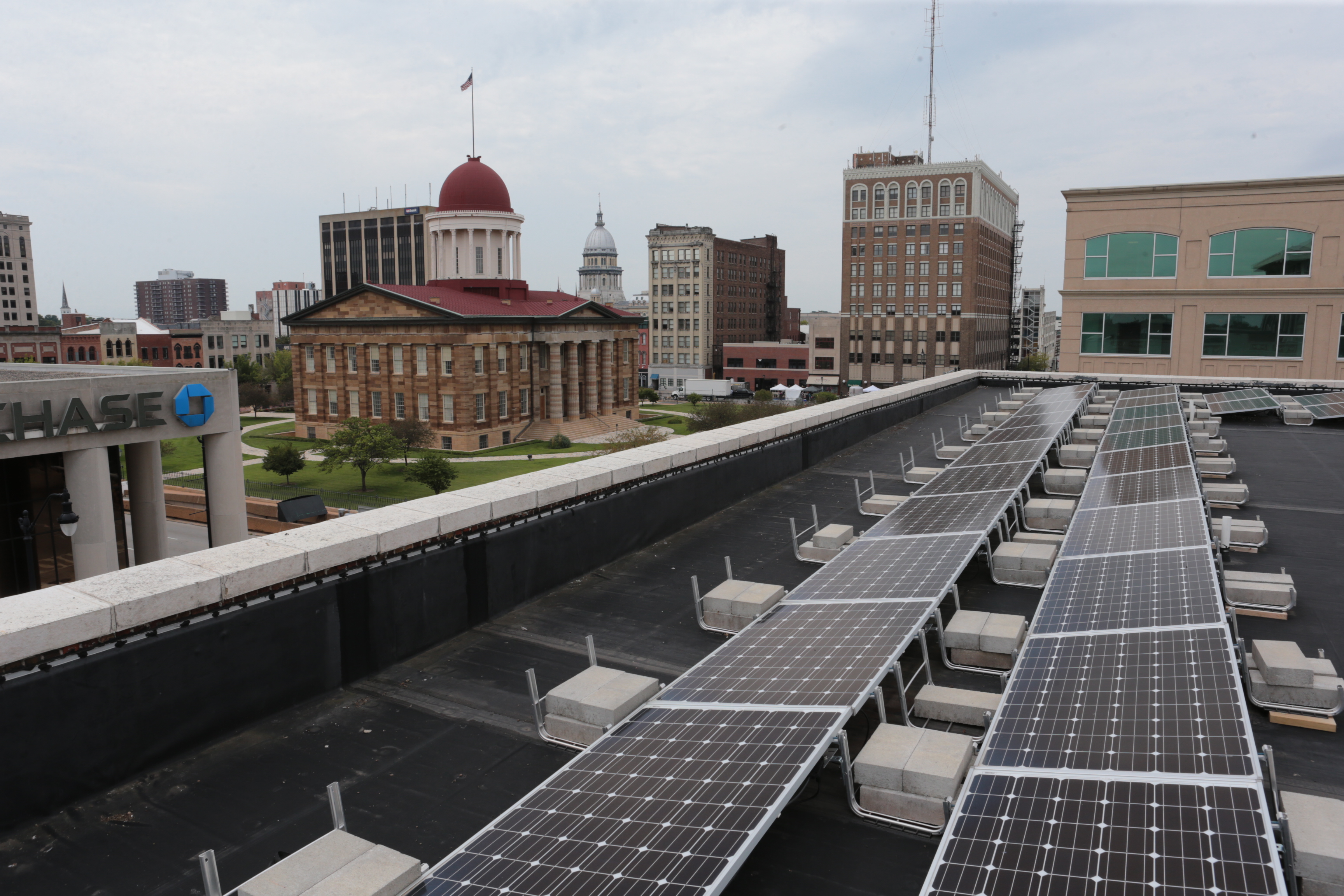 Practicing what they preach: Rooftop of WindSolarUSA at 104 N. Sixth St.

Michelle Knox, president of Springfield-based renewable energy and efficiency company WindSolarUSA, has reason to feel triumphant. A unanimous decision handed down April 3 by the Illinois Commerce Commission found in favor of a coalition of 12 Illinois solar businesses, including Knox’s. The ICC decision heads off what could have been a financial calamity for renewable energy businesses throughout the state. Instead, it preserves a financial incentive benefiting Springfield consumers choosing to adopt solar energy.

In December of 2016, Gov. Bruce Rauner signed the Future Energy Jobs Act (FEJA), which provided renewable energy credits (REC) to users of clean energy. The law was meant to help fulfill a 2007 state mandate requiring Illinois to have 25 percent of its electricity portfolio coming from renewable sources by 2025. FEJA was inclusive, with customers of municipally owned providers like CWLP and rural electric cooperatives, along with the investor-owned utilities and energy behemoths Ameren and Commonwealth Edison (Com Ed), all able to participate. However, last month Com Ed threw a wrench into the process by filing an exception with the Illinois Commerce Commission, stating customers of municipal and cooperative providers should be prohibited from receiving REC funding. This meant that, if Com Ed had its way, Springfield would be excluded, as City Water, Light and Power is owned by the city. An ICC administrative law judge initially found in favor of the ruling.

“If this had gone forward, everybody here in the capital city would have been denied the funding opportunities that their neighbors in Rochester (which is served by Ameren) would have,” said Knox. In response to the judge’s ruling, over 600 public comments were posted to the ICC website and Knox’s coalition filed a “brief on exception” stating the reasons they believed the ruling to be unjust. “It was rather unprecedented,” she said, “but the five ICC commissioners unanimously overturned the initial ruling,” thus allowing municipal and cooperative utilities to participate in the program. “I think it’s inspiring to know that the democratic process still can and does work,” Knox said. “When people band together for the right reasons, good work can be done.”

What this victory means for consumers is that owners of systems of 10 kilowatts or fewer – accounting for most residential systems, according to Knox – will be paid in one lump sum once their system is energized. “Based on current draft pricing, that amount would be right around $15,500,” she said. “In addition, if it costs $30,000 to install the system, you would get a 30 percent federal tax credit ($9,000). When you throw that $15,500 on there, you have $24,500 in first-year incentives.”

The process of converting your home to solar energy is not as difficult as some might fear, according to Knox. The company providing the system would require 12 months of electricity bill data, specifically kilowatt-hour consumption and the amount of billed electricity, along with a Google Earth aerial view of your home. “Once we have all of that information, we would be able to tell you what size system you would need.” A preliminary system design would follow, along with a cost model showing the projected financial performance of that system over its 25-year life. At this point, if everything is satisfactory, contracts would be drawn up.

“Although you would receive the two first-year incentives during year one,” Knox emphasized, “you still have to pay up front for the system.” Luckily, local banks are now starting to finance solar power systems – in particular, Town and Country Bank, Heartland Credit Union and CEFCU have all been working with Knox. “Back when I was starting out in 2008, I tried talking to banks about financing solar systems and they didn’t even want to have a conversation. So, we’ve come a long way.”

The cost depends on which products you purchase. “WindSolarUSA has always marketed American- made products,” Knox said. “The challenge for us has been to keep our overhead down so we can be competitive with other companies that are marketing foreign-made products, namely Chinese modules that are significantly less expensive than those produced here in America.” Knox described the Trump administration’s recently imposed 30 percent tariff on Chinese solar modules as representing an effort to level the playing field. The tariff allows American manufacturers to be competitive while still offering decent wages to their employees. The tariff promises to hurt U.S. companies relying on Chinese-made products. “All that has no effect on us because we have always marketed American products anyway,” said Knox.

“I think there is a myth out there that solar is way expensive and people can’t afford it,” Knox said. “I think it’s important to bust out that myth and let people know that solar is affordable, that now you can finance it if you need to. Plus you get that lump-sum REC payback. And that’s all before we even start talking about the utility cost offset!”