In Part 2, Glenn explains how SolarTech Universal creatively addresses two of these enemies: water and heat. (The third enemy, bad policy, merits its own article in Part 3.)

(This interview has been edited for brevity and clarity)

A: Other solar panels are less expensive than SolarTech panels; how do you explain that your solar panels have innovations that make them, in the end, a much better investment for customers?

Glenn: I talked originally about the three worst things for solar:

SolarTech spends time and energy figuring out ways to make their solar panels highly resistant to the first two (we’ll talk about the third later.)

A:  As in any industry – the cheapest isn’t necessarily the best, or even the best value.

Glenn: At SolarTech, we’re very cognizant of that, so we make our solar panels as long-lived and productive as possible. We structure our panels to avoid the failure mechanisms that can affect panels’ longevity.

For example, let’s start with defeating water. Imagine that you’re a manufacturer trying to deliver the cheapest possible product. To keep those prices low, you might sacrifice in terms of the materials you use to make your product, such as the sheet of plastic called a backsheet that’s on every solar panel. 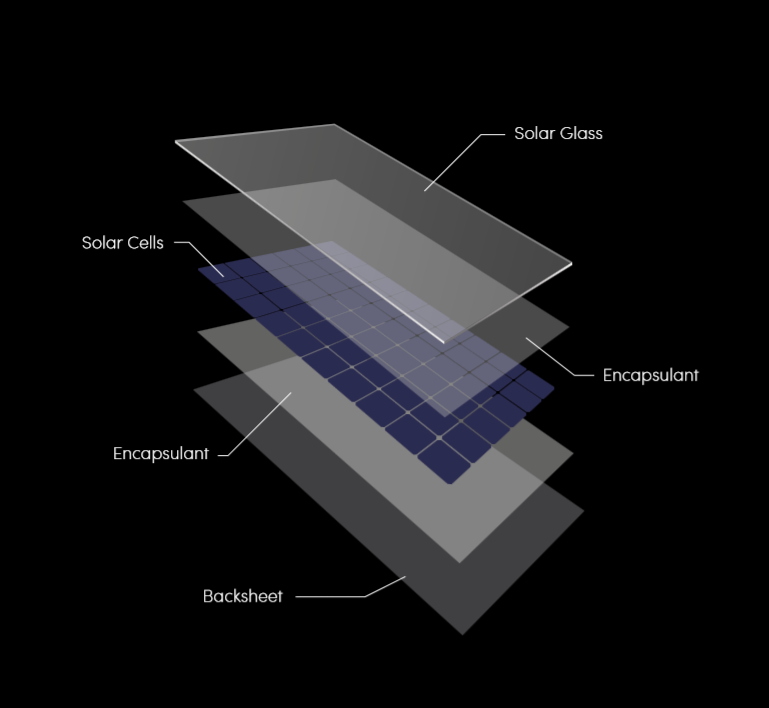 Diagram of Solartech panel, with backsheet and encapsulant labeled, courtesy of Solartechuniversal.com

If you’re trying to keep costs down, you might skimp on the quality of that backsheet. However, those cheap backsheets have microscopic holes, which we call porosity. Water can enter through those holes, into that material, and affect the solar panel’s performance.

Because of that danger, we make SolarTech backsheets 99.9% water impermeable, so they’re protected from water entry.

We also make the internal components of the panel, such as the encapsulant, water-repellent too. The encapsulant is the plastic that melts and holds everything together, like the cheese in a grilled cheese sandwich. 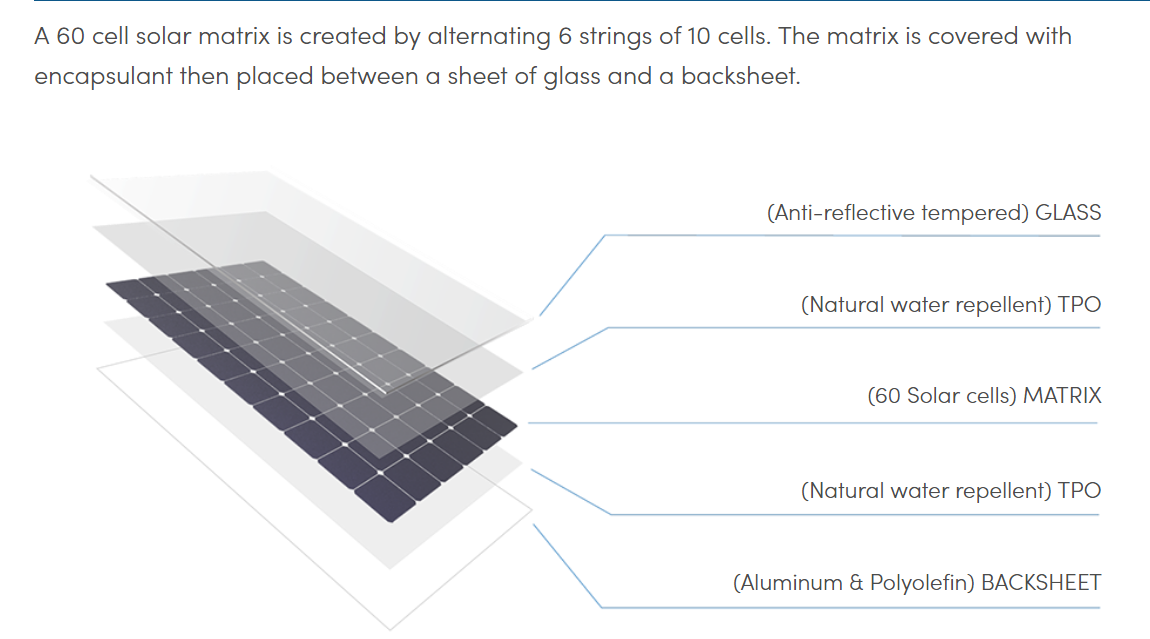 To make the encapsulant, many manufacturers use a material called an alcohol-based material called (Ethylene Vinyl Acetate). However, since alcohol attracts water, these panels can still get water entry in the back; this water entry hurts their production.

Since we’re cognizant of this at SolarTech, we use hydrophobic materials (water-repelling instead of water-attracting) such as TPO (thermoplastic polyolefin). This heightened quality might cost us money in the production process, but we do it because it benefits the end consumer.

Glenn: For the homeowner and for the business owner, going solar isn’t just a capital investment; it’s a 30-year investment. It’s a lifetime investment, since solar panels that were installed in the 1970’s still produce energy. So the devices that you put into that investment should last for the duration.

A: Going back to what you said, that American manufacturers should focus on higher quality and innovation – I was actually very interested about the SmartWire technology that you use for your solar panels.

Could you give a lay-person’s explanation why those give you the most “bang for your buck”?

Glenn: Absolutely. I mentioned earlier the three worst things for solar, and the second was heat. Our SmartWire technology mitigates that effect; to explain it, I like to use the analogy of cars and highways. 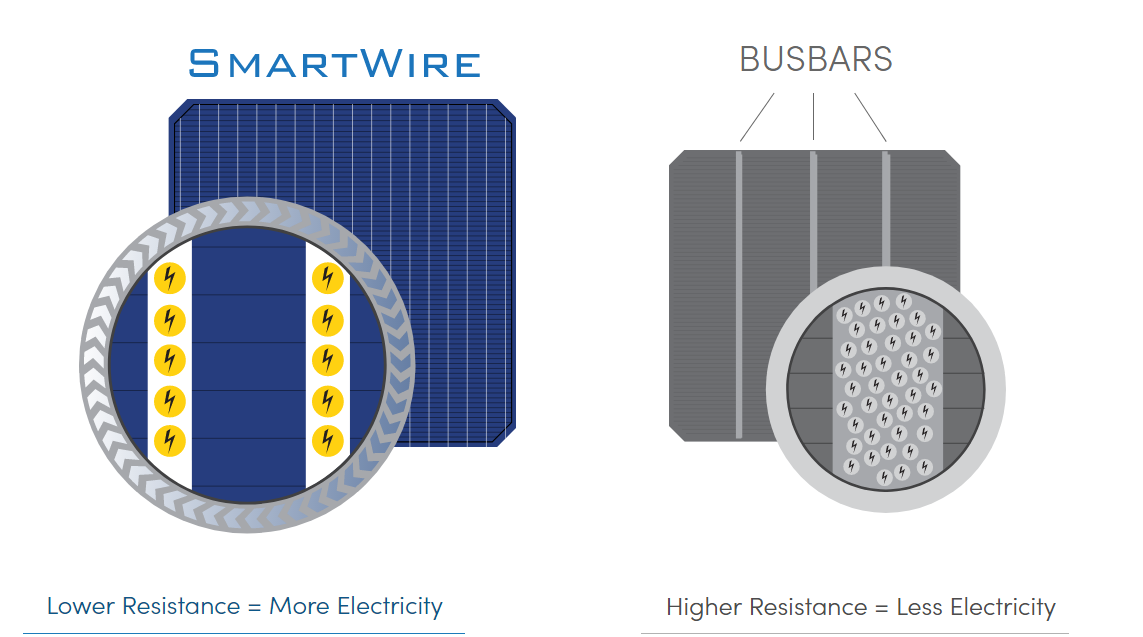 A traditional solar panel has 3 to 5 busbars soldered onto the surface of each cell in the panel. Further cell-to-cell solder points transport the energy from one cell to the other.

SolarTech has removed the bus bar; instead, we use a multi-wire, which is a copper wire which has a proprietary coating that runs over and under the cell, to replace the bus bars.

Both kinds of cells respond to sunlight in the same way: when the sunlight hits the surface of either cell, it excites the electrons. They run to the surface of the cell like cars and, like cars, “run” down the wire – or busbar – like it’s a road. They’re trying to get to the highway to get off that cell.

A: And the more electricity you lose.

Glenn: Correct. Then, since energy can’t be created or destroyed, when those electrons fall back into the cell they recombine and become heat, which compromises the solar panels’ efficiency.

To solve that problem, SolarTech panels all have 18 wires running over and under the cell instead of just 3 or 5 busbars. We’ve reduced that travel distance so that the car – the electron – doesn’t have to travel so far to get to the wire and off the cell.

A: And so you have more of the cars getting to where they should go.

In addition, this multi-wire format also reduces an effect called resistivity. To understand why this is important, let’s imagine the cars on the highway again.

When all those cars run along I-75, they get into a traffic jam. Just like those cars, the electrons on a traditional busbar bump into each other, which makes it harder for that energy to get off the cell and into the customer’s home. In other words, that “traffic jam” creates resistivity.

On the other hand, those eighteen copper wires in SolarTech panels give those electrons multiple pathways, so it’s easier for energy to get off the cell into the customer’s home. Thus, we’ve reduced resistivity.

There are other benefits to the SmartWire too; for example, it helps reduce the effects of micro-fractures (see image below). Micro-fractures can be caused by installers with limited experience, or perhaps new crew members on the installation. They sometimes walk on the solar panels, which causes tiny cracks in the cell.

When that happens, let’s imagine that your car’s back on the road, and you hit a crack. You can’t go through the crack, so you have to stop, just like the electrons have to fall back into the cell when they hit a crack in the panel.

But in a SmartWire cell, all the electron “car” needs is a point where the panel intersects one of the eighteen wires, which is never far away. So even with micro-fractures in the panel, those SmartWires can still transport that energy up and over that crack.

Diagram of SmartWire vs. busbar panel’s reaction to fractures, courtesy of solartechuniversal.com

The net effects give SmartWire panels better operating characteristics. Meyer-Burger, our technology partner, estimated an additional 2-8% yield in the kilowatts-per-hour produced; you could say (using the car analogy again) that we increased the “miles per gallon” of the device.

A: Thank you very much – that was an excellent explanation of, and analogy for, it!

Glenn: If you or your reader want to go on our website, we have an online brochure of SmartWire technology. It explains more of those exact benefits.

Well, that was enough solar food for thought for one day! But this isn’t the end of our talk – in Part 3, Glenn takes on the final enemy of solar: bad policy. To get notified of this last part and to join the conversation about the 3 Worst Enemies of Solar series, follow us on

What would you compare solar energy and/or solar panels to? Let us know on Twitter and Facebook in the links above! 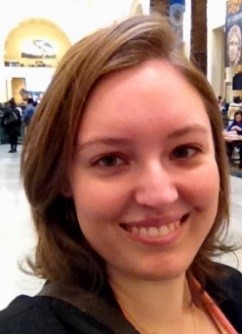 Allison Ruedig is a freelance writer and editor for businesses creating a greener, more sustainable future. She specializes in solar energy; say hi to her at linkedin.com/in/allison-ruedig and allisonswords.com!